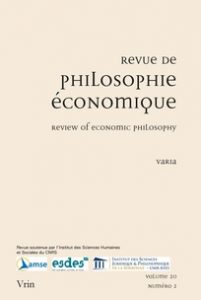 This essay contains my reflections on the developments that have taken place within the field of economic methodology since the beginning of the twenty-first century as well as some of the background relevant to these developments. It is motivated in part by the fact that after fifteen years of editing the Journal of Economic Methodology (JEM), John Davis and I stepped down at the end of 2019. There have been many changes in the field during our years as editors and this seems to be a very good time to reflect on those developments. The subtitle « Post-Reflection Reflections » alludes to the fact that my Reflection Without Rules was written during the last years of the twentieth century and was published in 2001. Not only was Reflection my attempt to « write an interpretive survey of recent work in economic methodology and the various developments within contemporary science theory that are relevant to it » (ix), it was, unlike much methodological writing, less an attempt to persuade the reader about how scientific economics ought to be done, than an historical investigation of the various forces that had helped move economic methodology to where it was at the time. Since I argued that the field was in the midst of a significant, but generally unrecognized, change, this also seems like a good time to assess my argument in light of recent developments.
This paper can be read as a companion piece to Daniel Hausman’s recent retrospective reflection on the philosophy of economics published in this journal (Hausman 2018a)…